Dear Kids, There's always a first time for everything. This afternoon I just helped DJ ryan here set up his own Blog

So remember when the blog becomes famous, and Ryan becomes filthy rich, your old man helped introduce him to the world of blogging.
Written by TK at Monday, February 27, 2006 No comments:

And what a day it's been. The current government got a very, very close call. Events of twenty years ago almost repeated itself before our very eyes. I guess there is no guarantee that what happened today will not happen again, twenty years into the future. The political Heroes of today could be the villains of tomorrow. And Vice versa. So in the future, when Trillanes is already a senator, when Ronald Lumbao finally becomes partylist representative of the Masa, and Allan Paguia assumes the seat of supreme court chief justice, remember this...

when forced to choose sides between two EVILS who are lunging at each other's throat with machetes, the only moral choice is: NONE OF THE ABOVE.
Written by TK at Sunday, February 26, 2006 2 comments:

Dear Kids, Tonight while gazing at this original painting, something really fantastic happened. I saw somebody walk up the stairs towards where the Juan Luna was hanging. It took me a few seconds to realize it but it hit me- Tonight I get to meet one of my "idols". Ok, he's not exactly american idol material but heck, who cares. I finally met Larry Henares.

In my own pantheon of "greats" he ranks second only to the late Ka Louie Beltran. I may not always agree with him with his stand against Liberal trade, his tirades against Bernie Villegas, The Opus Dei, and how he drools about TinTin DeLosReyes-Cojuangco (he said he slept with her...because when they were infants, their parents used to lay them side by side on the same bed) but he surely made my day so many many times.

Hey Larry, just in case you are reading this, I've always wanted to ask you one thing. Back in the 60's when you ran for the senate, when the liberals where meeting with party leaders in the barrios, you related once that when you felt the urge to smoke you asked a lanky party leader to buy you a cigarette. Ninoy was stunned by this. He said you just turned Bernabe Buscayno into your own personal assistant. Is this story true or is it one of your magnificent bovine eschatologies?
Written by TK at Friday, February 24, 2006 1 comment: 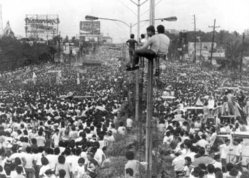 Dear Sage, The Americans refer to the second world war as the Last GOOD WAR. They believe that US and its allies (including the Philippines) fought on the side of absolute GOOD. The battle lines were very clear. Good and Evil are distinguishable. It is something that can't be said about the Korean, Vietnam, Afghan, and Both Gulf Wars.

For us Filipinos, The first EDSA that happened almost 20 years ago, was the GOOD EDSA. Before historians make the mistake of rewriting the events of two decades ago to please the (military) party in power I would like to tell you guys now what really happened in very simple terms:

The Filipino People rose as one to shield its own soldiers from annihilation. With our own warm bodies we PROTECTED the armed soldiers who lauched a failed coup attempt against its own commander in chief. By law they should all have been court martialled and summarily executed. BUT MY GENERATION DID NOT LET THAT HAPPEN.

The Filipino People were the Knights in shining armor who protected the not-so-virtuous Damsel called the ARMED FORCES OF THE PHILIPPINES. 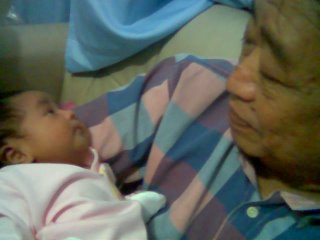 Dear Sadie, This is your first picture with your Grand Dy. HAPPY VALENTINE'S DAY!!!
Written by TK at Tuesday, February 14, 2006 3 comments:

"The most stringent protection of free speech would not protect a man falsely shouting fire in a theater and causing a panic. "
Schenck v. United States (249 U.S. 47)March 3, 1919

Dear Sage, Yesterday, February 4, 2006, a stampede cost the lives of almost a hundred Filipinos. A crowd of 25,000 was encouraged by the producers of a TV game show to line up in the streets outside a stadium, with a capacity of only 15,000 seats, for almost a week. Some say the panic was started by somebody who shouted “may bomba! May Bomba!” (There’s a bomb! There’s a bomb!) It was a believable, plausible and PREDICTABLE threat considering that the Philippines has had more than its share of Terrorist Attacks.

Freedom of Speech does not include the right to shout “FIRE” in a crowded theater. That’s the reason why I decided not to post a controversial cartoon depicting the Prophet Mohammed as a Terrorist. It was very disappointing to see those members of the Moslem Faith reacting the way they did to the Danish Newspaper’s decision to exercise its journalistic freedom. So far radical arabs, who claim to be followers of Islam, have attacked or burned down Danish embassies in some parts of the middle east.

Our Islamic brothers must learn from the mistakes of those of us who practice the Judaeo-Christian Faith. The period called “dark ages” was marked by the absolute power of religious leaders, demonization of rationalism, and absence of separation between science and religion. It was an age where ignorance triumphed over reason- Ignorance waving the Bible and Papal encyclicals.

Fortunately, members of Islam have yet to equal the brutality/barbarity of our “Missionaries” who were responsible for the “Christianization” of the world. Christianity has a Dark history. It also has a Dark underbelly. There are Christians who believe with conviction that it is better to be good “Amway” Sales Representatives rather than good neighbors. What’s worse, there are still “Christians” who are more brutal and murderous than Usama Bin Laden. If Our Muslim brothers do not start to recognize the need to liberate themselves from the petty TYRANTS in their midst, they might end up like the ones they hate most: Slaves of religion forever in bondage to ignorance like that “Christian,” Brother Eli Soriano.

I wish Someday, when you are old enough to read and understand the entries in this blog, our Moslem brothers will see God not just in the Islamic mosques, but also in the eyes of non-Moslems who respect their rights to their beliefs as well as civil liberties.

Dear Sabine, We were kinda worried you might get jealous with the attention that the new baby was getting from Mom and Me. But you know what? Whenever you hear the baby cry, you give me a worried look and say, "Dad, Dad!...Bibi..." while pointing at your sister. Then you hold my hand and push it to the direction of the crib and say "Get, get!"

One time when you saw that Sadie was about to cry, you placed a towelette on my shoulder- the same one you see me use whenever I burp her. Even though she has taken your place beside Mom, everytime you wake up at night you say, "Bibi" then pat her gently on the head, and fall asleep.

Dear kids, years from now, when I start pontificating about "the good old days," or how good I was, you're gonna love reading what your Ninang Jaycee sent me via email:

When I was a kid, adults used to bore me to tears with their tedious diatribes about how hard things were when they were growing up; what with walking twenty-five miles to school every morning .. uphill BOTH ways . through year 'round blizzards. Carrying their younger siblings on their backs ... to their one-room schoolhouse, where they maintained a Straight-A average, despite their full- time, after-school job at the local textile mill .... where they worked for 35 cents an hour just to help keep their family from starving to death!

And I remember promising myself that when I grew up, there was no way in hell I was going to lay a bunch of crap like that on kids about how hard I had it and how easy they've got it!

But now that... I'm over the ripe old age of thirty, I can't help but look around and notice the youth of today. You've got it so easy! I mean, compared to my childhood, you live in a damn Utopia! And I hate to say it but
you kids today you don't know how good you've got it! I mean, when I was a kid we didn't have The Internet. If we wanted to know something, we had to go to the damn library and look it up ourselves,
in the card catalog!!

There was no email! We had to actually write somebody a letter ... with a Pen! Then you had to walk all the way across the street and put it in the mailbox and it would take like a week to get there!

There were no MP3's or Napsters! You wanted to steal music, you had to hitchhike to the damn record store and shoplift it yourself! Or you had to wait around all day to tape it off the radio and the DJ'd usually talk over the beginning and @#*% it all up!

We didn't have fancy crap like Call Waiting! If you were on the phone and somebody else called they got a busy signal, that's it! And we didn't have fancy Caller ID Boxes either! When the phone rang, you had no idea who it was! It could be your school, your mom, your boss, your bookie, your drug dealer, a collections agent, you just didn't know!!! You had to pick it up and take your chances, mister!

We didn't have any fancy Sony Playstation video games with high-resolution 3-D graphics! We had the Atari 2600! With games like "Space Invaders" and "Asteroids" and the graphics sucked ass! Your guy was a little square! You actually had to use your imagination! And there were no multiple levels or screens, it was just one screen forever! And you could never win. The game just kept getting harder and harder and fast er and faster until you died! ... Just like LIFE!

When you went to the movie theater there no such thing as stadium seating! All the seats were the same height! If a tall guy or someold broad with a hat sat in front of you and you couldn't see, you were just screwed!

Sure, we had cable television, but back then that was only like 15 channels and there was no onscreen menu and no remote control! You had to use a little book called a TV Guide to find out what was on! You were screwed when it came to channel surfing! You had to get off your ass and walk over to the TV to change the channel and there was no Cartoon Network either! You could only get cartoons on Saturday Morning. Do you hear what I'm saying!?! We had to wait ALL WEEK for cartoons, you spoiled little bastards!

And we didn't have microwaves, if we wanted to heat something up ... we had to use the stove or go build a frigging fire ... imagine that!
If we wanted popcorn, we had to use that stupid JiffyPop thing and shake it over the stove forever like an idiot. That's exactly what I'm talking about!

You kids today have got it too easy. You're spoiled.
You guys wouldn't have lasted five minutes back in 1980!

I guess what I want you guys to remember is that no matter how hard my childhood was, our Lolo's and Lola's generation, and generations before us, deserve much, much more respect. And if I forget that, you can show this blog entry to me. I promise, no spanking (Scout's honor.)