"Rain falling down
Ooh, it seems like it could last for years
Drowning me down
Drowning in a sea of tears
And little did I know
That someone set my soul... free!"-- TRUE FAITH

Dear Tristan, There's this movie called Any Given Sunday that starred Pacino as a PRO Football Coach. His byline was "Any given sunday, you either win or lose. But can you win or lose like a man?"

Son, I know what he means. But of all the lessons I could possibly teach you while growing up, that is one of the things that you have to learn on your own. Because the truth is, there have been sundays when I lost like a boy --not like a man. Someday too, there will be sundays when you will lose like a boy. But whether it's a ballgame, or a game of political chess, or in the matters of the heart, even when they defeat the boy in us, they can not break the man within who has the strength of someone with True Faith.

Even in defeat, even in tears, when you lose like a man with True Faith, you set your soul free so that next ballgame, next sunday, you can win... not just as a man

Dear Sage, we treated your Tita Sweet to dinner tonight at the new AMICI's in the Atrium of Megamall. She planed in from the red state of Kentucky and missed Thanksgiving because she had to go home here. her Dad, Lolo Ben, passed away almost a month ago.

She bought you three littlest pet dogs housed in a pollypocket like carrier.

When we got home, just before going to bed, I found you guys watching Sports Unlimited. It was quite Odd because I haven't seen you interested in watching sports before. But your Mom told me you didn't object when she switched to that channel.

I sat with you for a while. Hoping to get you interested in sports I commented that the featured sport that night was amazing (it was a frisbee competition that had rules similar to football). Sage, you frowned at my comment. You said "Dad, catching frisbees is what dogs do."

Anyway, the Island of Coron was featured in that program too. The shots were breathtakingly beautiful. It reminded Ayheen and moi of El Nido (where we spent our honeymoon.
Written by TK at Sunday, November 30, 2008 3 comments:

This Morning, November 28, 2008, was Sabine's Trade Fair in School. Sage asked her to buy something from the fair since she couldn't come with us. Sabine bought her colored pens and bubble toy maker.

Dad wasn't able to come too but we ate lunch with him. Thank You Lord for the gift of Health. and so much more!

anyway, I think yesterday was the last thursday of November in the continental US. It was thanksgiving. Belated Happy Thanksgiving to YOU All!

with the election of Obama as US president, Americans have something special to thank the Lord for. Obama is a Cool Change, compared to the clueless prick who presently occupies the whitehouse. 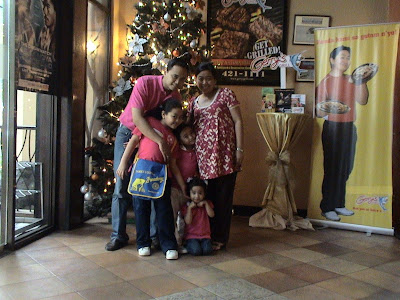 Dear Sage, yesterday, November 22, was your Grade 3 family day. This year's theme was Broadway. Your class, 3 Diamante, danced and acted the music from my favorite musical, PHANTOM OF THE OPERA. 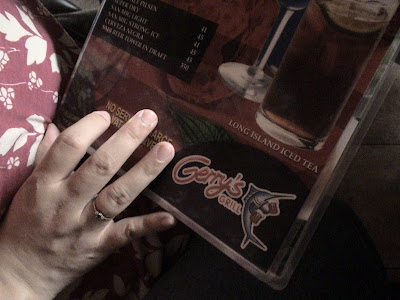 Anyway, after the Program we ate out. It was the first time in 5 Family Days that Lolo Nonong wasn't with us. He usually treat us to lunch. He had to rest at home so after eating we went to him and your cousins Kitkat and Boing.

And By The Way, I lent the mask of the Phantom that hangs in our car to your classmate who played the part of Eric. It gave the part more credibility. 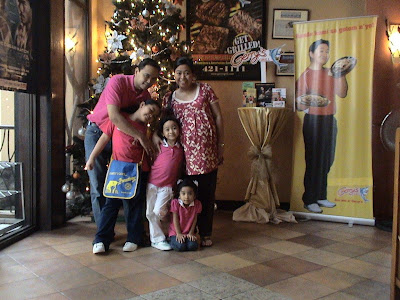 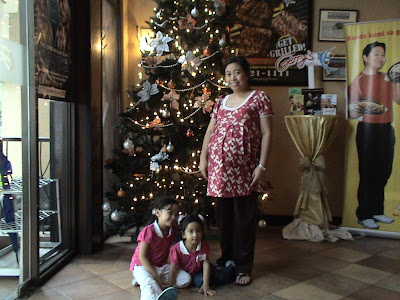 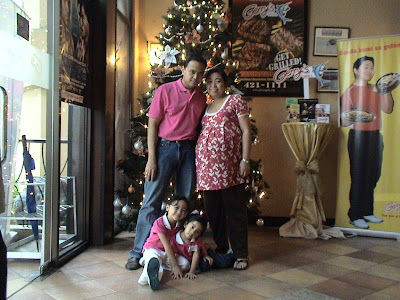 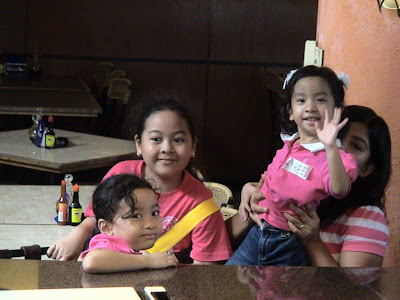 Most people die or become vegetables when they suffer from hemorrhagic stroke. Dad (Sage's Lolo) had one. The only deficit he has is a slight slurring of speech and very subtle fine movement control of his left leg.

Dear Kids, I used to read Reader's Digest, that right-wing magazinelet (I really don't know how to call it). I knew then that the ideology behind it was crap. But I love the fact that they condense the essence of large books into a few pages so that it would be easier and faster to read novels. I read from Reader's Digest the story of Kunta Kinte. He was an african kidnapped by slave traders and sold to an american family of the deep south. I remember details of the story like how he and other kidnapped africans danced and chanted african words while in shackles as they "entertained" their kidnappers.

Roughly translated, it means "Screw You". Those old, white supremacist men actually thought the africans put up a great show... (they were Losers then like they are now.)

Barak first appeared on this blog as a vocabulary lesson. I tried to tell you kids the difference between "Chutzpah" (balls) and "Hubris".

I talked about him in 7 other posts. Click here.

Actually, right after he won Iowa in the primaries, I congratulated him by posting a message in the left upper corner of this blog. Unfortunately, unlike regular posts that can be retrieved later on, side posts like my message to him can not be restored once deleted.

I think it said "Congratulations Brother! But let's face it... You Can't Win!" or something to that effect.

There are only a few times in our lives when we are thankful that we are wrong: When we tell cancer patients that they can't be cured and when we tell Kunta Kinte's sons that they live in the hopelessly bleak America of Republicans like Joseph McCarthy, Edgar Hoover, Richard Nixon and David Duke (the grand wizard of Ku Klux Klan).

TO THE GALVEZ CLAN IN THE DEEP BLUE STATE OF NEW YORK: YOU DID GOOD IN TAKING BACK AMERICA FROM THESE REPUBLICANS AND GIVING IT BACK TO THE JOHN F. KENNEDYs, MARTIN LUTHER KINGs, AND OBAMAs.

Kunta Kinte's sons are now officially First Class Citizens of the United States. African Americans must take heed of the warning from a great Asian nationalist whose descendants have yet to capture the white house. TO paraphrase, he asked "What good is Freedom if the slaves of today are the tyrants of tomorrow?"

It is a question that must live on forever even after the sons and daughters of Rizal have earned the right to the oval office.

On the night of the elections '08, when the crowd of latinos, asians, African Americans outside the white house was celebrating the outcome, they sang in chorus this song popularized by SOUL MEN (Blacks):

It's a song for George W. Bush. (His ancestors used to be second class citizens of America too. When the British Gentry ruled the then 13 colonies,they thumbed their noses at Bush's Great Grand Daddies for being uncouth, uncultured, unwashed. ) George W. Bush, the man who gave the world Abu Ghraib, Gitmo's Camp Xray, and countless orphaned children in Iraq. He also gave America a Trillion Dollar deficit after inheriting roughly the same amount of SURPLUS MONEY from his predecessor. More tragically, his policies resulted in thousands of American armed service men coming home in flag- draped caskets... JUST LIKE DURING THEIR DEFEAT IN VIETNAM.

His alcohol addled brain may need help to translate what the song means. it means this, Mr. Lameduck President:

"Sorry, I never told you, all I wanted to say.
Now it's too late to hold you. '
Cause you've flown away, so far away."- One Sweet Day

Mom, I've lost count. I'm not sure how old you would've been today.

I hope I could see you smile when you see Sage, Sabine and Sadie playing together with Myka, Dominic, Justine, Kitkat and Boing.
Written by TK at Sunday, November 02, 2008 2 comments: