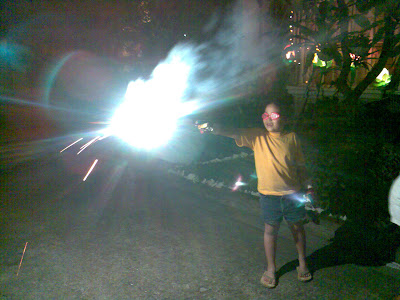 "If I had just one wish
Only one demand
I hope he's not like me
I hope he understands
That he can take this life
And hold it by the hand
And he can greet the world
With arms wide open."-- Creed

Dear Kids, last year just before New Year (2007) and right after it, we had to put an IV (swero) on Lola Letty, Sabine and Sadie to prevent dehydration from setting in because they had Acute Gastroenteritis.

This year, just before New Year (2008) and right after it, Sage got sick, so did Sadie. Gave us both quite a scare. the symptoms were benign but due to your parents' "OCness" when it comes to you guys, we did have sleepless nights.

Fortunately you guys are okay now.

Dear Kids, the future can only be predicted when it is already in the past. Having said those Sagely words (yeah, right) I now boldly announce my top 5 fearless forecasts/predictions for the year 2007...

1. There will be a lot of gore in the nobel prize awards.
2. Raul Gonzales, FG will prove that the old adage about tenacious grass is true.
3. Tony Blair will embrace the I.R.A. as a brother.
4. You will have a blast when you go to a SALE in Glorietta.
5. Song of the year: "Tatsulok" 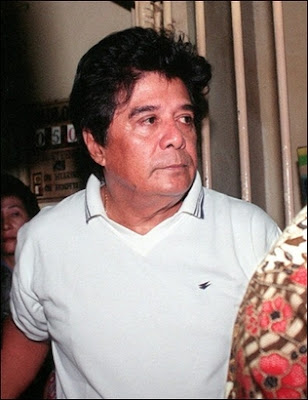 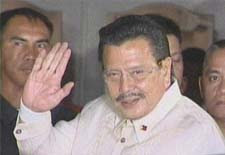 "The blues is just a song about

the one who left,

or the one you couldn't have,

Dec. 22, 2007, 1:08 A.M. EST (06:08 UT) is this year's winter solstice. It's the time of the year when the night is longest and the day is shortest. Around this time of the year, people, especially from temperate countries, start to complain of depression. Which is kind of ironic since it's the holidays. To put it simply, the supposed happiest time of the year is just around the corner. The more people realize this, the more depressed they become about being depressed. They couldn't help but feel left out when everybody else only has happy thoughts.

Researchers blame the lack of sunlight that supposedly wreaks havoc on our body's chemistry which make us vulnerable to depression. they have a cheesy name for this:

I started to write about this because I just realized that I made more blogs in 2006 than in 2007. wala akong ibang maisulat e. anyway...

The song below ain't the blues. But it's my Christmas Carol and Religious Song (think Handel's Messiah) rolled into one.

When dreaming, I'm guided to another
world time and time again at sunrise,
I fight to stay asleep, cause I don�t wanna
leave the comfort of this place cause
there�s a hunger longin to escape from
the life I live when I'm awake

Although I would like our world to change,
it helps me to appreciate those nights and
those dreams but my friend, I'd sacrifice
all those nights if i could make the earth
and my dreams the same the only difference
is to let love replace all our hate

No price too high

Dear Kids, Snglguy's blog entry a few days ago about senile monks missing the "R" reminded me of something I read from "Our Daily Bread" a few years back.

"A wealthy woman who was traveling overseas saw a bracelet she thought was irresistible, so she sent her husband this cable: "Have found wonderful bracelet. Price $75,000. May I buy it?" Her husband promptly wired back this response: "No, price too high." But the cable operator omitted the comma, so the woman received this message: "No price too high." Elated, she purchased the bracelet. Needless to say, at her return her husband was dismayed. It was just a little thing--a comma--but what a difference it made! "

"A panda walks into a café. He orders a sandwich, eats it, then draws a gun and proceeds to fire it at the other patrons.

'Why?' asks the confused, surviving waiter amidst the carnage, as the panda makes towards the exit. The panda produces a badly punctuated wildlife manual and tosses it over his shoulder.

The waiter turns to the relevant entry in the manual and, sure enough, finds an explanation. 'Panda. Large black-and-white bear-like mammal, native to China.

NOTE: Yes Atticus, I do read religious materials.
Deal with it. Capisce?
Written by TK at Tuesday, December 18, 2007 6 comments:

"The world will know
that freemen stood against a tyrant,
that few stood against many,
and that before this battle is done,
even a (FALSE) god king can bleed" - King Leonidas
Written by TK at Saturday, December 15, 2007 4 comments:

Dear Koryn and Isabel, you two don't know each other. I haven't met either one of you. But for me, the song of Creed is the perfect description of both your "websites"... that And the movie 300. That's why when I came across this YouTube video with scenes from the Movie 300 spiced up by the song Weathered, I just couldn't let it pass.

Your strength is inspiring Koryn. I have read some of your entries... The most important parts (especially the ones with your picture in Bora wearing those skimpy two-piece bikinis). and your entries about what happened a few years back. and how you bounced back. I now have a faint idea why the Tequila in your website is elegantly black.

Isabel, with a little alchemy of attitude, your goth-like spunk can turn into golden courage.

"So, I'm here again, Old Man.
even after a long absence I have not forgotten.
Ready or not, I'm coming, Old friend.
So do your worst...
you bloody bastard." --Prayer to Poseidon

DearKids, the first movie Sadie watched was "Surf's Up" (on the eve of your Mom's Birthday this year) while Sabine was "Shaggy the Dog". Sage's first movie was "Harry Potter and the Philosopher's Stone." Except for Ate Sage, you all enjoyed your first movies. But Ate Sage was practically traumatized. She was barely a year old when she saw on a fifty foot silver screen an image of fluffy, a three headed dog, descendant of Cerberus. She didn't get to choose her first movie. I chose it for her. I was trying to make a point.

HP was a controversial movie because some religious people say it's about seducing kids to join the dark side. I say, if your religious belief makes you scared of HP and Rock Music, then your faith is not founded on the Rock of ages, Christ. Regardless of that simple truth, there are artworks that should not be seen by kids even with adult supervision. You and Harry Potter taught me that.

That's why, I don't think I'm going to let you watch the Golden Compass. Not yet. But don't get me wrong. The author is an atheist but I believe the theme is not about killing God (which is dumb) but defying FALSE gods. That theme is as old as the scriptures. The books of Daniel, Jeremiah and all the prophets of old exhort us to kill Baal, Nimrod, Idols of Babylon, etc. And as I have said before two blogs down, when I mention gods in this blog, I'm referring to false gods, those humans we tend to idolize, those who present themselves as special messiahs but are just garden variety wolves in sheep's clothing. That's why I'm no fan of totalitarian bastards (tanong mo kay Atticus)... And ofcourse I'm also referring to those petty gods romanticized in greek myths like in the Poseidon Prayer above.

So someday maybe you will decide to see it with your barkada. But just like HP, remember, it's just a movie.

Now just in case you are wondering what is the most anti-catholic book I've read, well it isn't HP or The constipated Davinci Code. It's the THORN BIRDS. But the saving grace of that book is that it is just like me-- An ANTI-ABORTION FEMINIST.

To the Fringed Senator