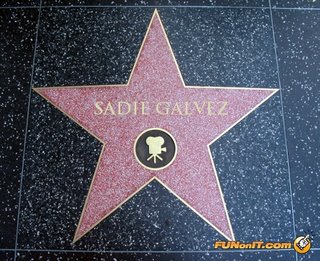 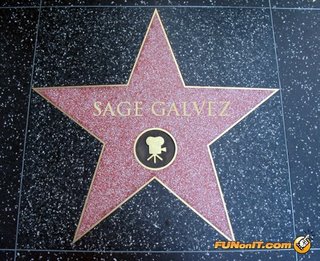 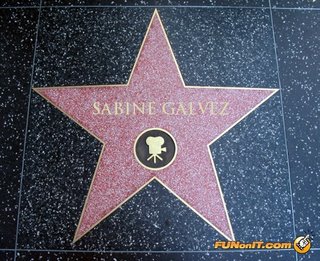 THE CONSTELLATION ORION IS THE MOST DISTINGUISHABLE FORMATION IN THE NIGHT SKY. THERE ARE THREE STARS IN ORION'S BELT. EVERYTIME WE LOOK UP AT THE NIGHT SKY TOWARDS ORION, WE SEE THESE STARS.
Written by TK at Monday, August 28, 2006 No comments: 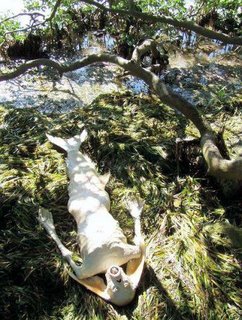 when you saw these pictures... 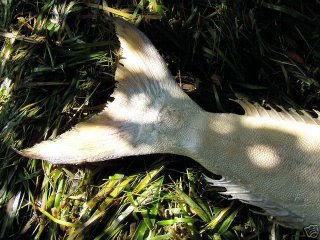 You said that they don't look real...

Didn't fool you one second.

The internet is a great source of information. It is also a notorious source of MISINFORMATION. Years ago I read about members of a weird cult called "Heaven's Gate" who committed mass suicide because they read in the internet that there was a flying saucer tagging along behind comet Halle-Bopp. They thought their ride to the next galaxy had arrived. Suckers.

There really are no mermaids. It is just a beautiful work of fiction. Just like Unicorns. 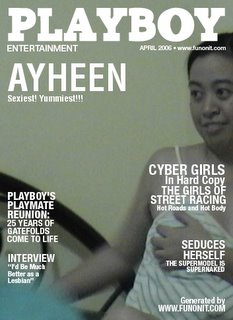 Dear Sage, This is the message your Ninang Jaycee sent to us...

Greetings to all our Family & Friends,

It is with our deepest regret to announce that our beloved father, Venerando " Benny" Galvez has passed away early this morning (August 11) at 2:10 am.
My father was not alone when he took his last breath. He was accompanied by his only son & youngest, Casel & his older brother Manuel "Junior". My Dad was able to see all his children altogether & also had the chance to meet & cradle in his arms his newborn grandson Sebastian Cole, born to Jennifer " Jen-Jen" & Bill.
My family would like to thank you all again for all your kind thoughts & prayers. We know everyone's been trying to get in-touch with us. Sorry, we have been very busy to even have a chance to return some of your phone calls. For those who left messages with other family members, thank you for your condolences.
Once again, Thank you all.

I read once that if you want to live forever you can do THREE things: Write a book, Plant a tree, Sire good children.

Your Lolo Ninong Benny sired FOUR beautiful, wonderful kids. I don't know if he ever planted a tree or wrote a book. It really doesn't matter.

He will live forever. Thanks to your Ninang Jaycee, Tito Casel, Tita Jenn and Tita Ochie (Guys, I'm really sorry I couldn't bring myself to write this post earlier.)
Written by TK at Wednesday, August 16, 2006 No comments: 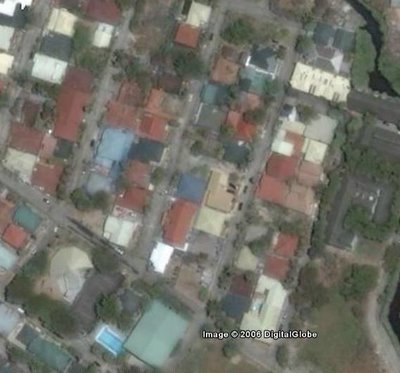 Our village (from Darna's point of view)

Dear Sage, Somebody told me recently that the song you hear me humming these days is the current favorite of ” tomadors “. Well, I’m not sure if they are too inebriated to know what it really means or what makes it naughty (hence what makes it my song of the month)

When we were kids I know a friend of mine who put a small mirror on top of his shoe laces so he could see under our teacher's skirts. he calls the process "patingin sa langit" from time to time he spots tufts of the body's most intimate growth of hair peeking out of our teachers' underdrawers. He calls them "ulap"
(Now you know why you are in an ALL GIRLS' SCHOOL).

Anyway, that's why when I first heard the song, I instinctively knew that somebody somewhere was playing with words.

Only recently did I realize that the third part of the song, about the singer's request to peek behind the "stars" also was a double entendre. A cutie with well-endowed bosom play the part of a local super hero named "Darna" Her costume had two stars barely covering the upper part of her torso. That's why everyone wants a peek behind her stars.

She already belongs to somebody-- a BF. But that's the beauty of music. It reaches beyond the singer's grasp and touches everyone, even the stars. She may belong to somebody else, but for a brief moment, while the music lasts, Narda belongs to the song.

The most powerful leaders of the defunct soviet union, cuba, north korea, Iran, Neo-Nazis, and Neo-Conservatives sought and are seeking to define what is and isn't art. What is funny and humorous and what is obscene-- even though it is just an irreverent remark about them.

Because in the final analysis, man's ability to communicate his feelings to another individual through his art is as formidable as the atomic bomb. Humor is not just the best medicine-- it is a lethal weapon too.

Music, like all the arts, is a communications skill. That's why I encourage you to develop your talents. But I hope that you will learn to use it not just as a weapon but as a divine tool to enrich the lives of those around you.

A sense of humor is also an effective weapon used by women to keep their men's leashes really short. atleast that's how your mom keeps me in line.
a few days ago your mom noticed that I left my wedding ring in the bathroom. while smiling like a mischievous cat, I told her that I had no plans of wearing that ring that day so that when a cutie like narda sees me, I could still feign bachelorhood. Without missing a beat she said, "Right. I can imagine her asking you 'Doc, how old are you?' and when you tell her that you're 38 she'd say, 'And you're not married? Are you gay' "

I stopped smiling and said "hand me back my damn ring." It never left my finger the whole day.

From your Ninang Jaycee... 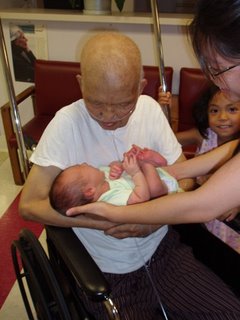 Dear Sage, I just got this letter from your Ninang Jaycee 18 Minutes ago. It's not very good news about her Dad, My Ninong Benny. Ninong was the reason why I had to visit NY last March. Let's continue to pray for him, wish him well, and be grateful that with God's grace, he was able to hold his first Grandson in his arms. May he watch him grow up to be as strong and gentle and loving as his own children: Ochie, Jaycee, Jenn and Casel.

Greetings to all my cousins & friends,
I am sorry I haven't really had the time to update you all regarding my Dad's health. I have received all your emails & phone messages asking to see how my family & I are doing and how my Dad is doing.
As you all know, my sister Jen & Bill recently gave birth to their first born son, Sebastian Cole ( "Ian" ) on July 23, 2006..on that same day my Dad was rushed to the hospital because he was complaining of not feeling too well. My Dad up to this day, Aug 4, is still in the hospital.
During his fourth day stay at the hospital, the doctors had placed a chest tube insertion to remove the fluids from his lungs. My Dad was still able take in food & fluids. His favorite food to eat was Rice Congi & Beef Rib Tips from our neighborhood restaurant. He always goes there with my mom for dim sum.
My dad was recovering pretty well & had many family & friends visiting him. He would read the newspaper , watch TV, play cards ( solitaire ) & sometimes tries to be funny when having a conversation with him.
Earlier today, ( Aug 4 ) my dad ate a good breakfast with my mom & even smiled at the guy who was taking his X-ray while sitting up....as if his picture was being taken by a photographer. My dad was supposed to be released today & coming home. However, the doctors & nurses detected that his oxygen level was low & they had to do an emergency intubation to help his body get the proper oxygen it needs.
My Dad is a real fighter, when he was home with us, he would exercise & go for short walks. Now that he is hospitalized, it's hard to say if he is strong enough to help fight for his life. Only God knows what the future holds, my family & I pray that God will give my dad the strenght & comfort he needs to stay alive & be with us for a little bit longer.
Please do continue to include my Dad & my family in your prayers.
I have attached a photo of my Dad taken last night, it was his first time to actually meet his first grandson Sebastian.
Once again, thank you for all your thoughts & prayers.

Dear Sage, that's the title of a TV show back in the late 80's and early 90's. one of my all time favorites. There was an episode there where the hero said that we must not let people believe in superstition, lies, psychics because when they start believing in these frauds they become vulnerable to dictatorships and all forms of tyranny.

First time I heard it was in a rerun of that TV show. I did not understand it. Then I realized that there is more than a grain of truth in what the character said.

Politicians use these gullibility to their advantage. You know why Nostradamus became famous in the first place? A certain adolf hitler used the writing of this obscure french guy to make a self serving prediction. He used a Quartrain (a part of the french guy's book) to say that nostradamus predicted that he will be victorious in his war against the allied powers. It was purely psychological warfare.

What's hilarious is that the allied powers used THE SAME BOOK OF THAT FRENCH GUY to predict that they will win their war against the axis.

What is not funny anymore is that when the allies won the war, people actually started believing the propaganda of the allies about nostradamus-- they forgot that his quartrains are so vague, even hitler USED them in his own propaganda to predict a victory that NEVER WAS.

Please don't believe the propaganda of tyrants about so called psychics. They are as clueless about the future as everyone else.

The God who loves each and everyone so much is the God of Logic, of Mathematics, of Science, of TRUTH. His ways and language is mysterious BUT please remember that self proclaimed psychics DO NOT SPEAK for him.

There is a really, really stupid game show out there called "deal or no deal". It does not test any skill that the contestant may have. whether one wins or lose depends on Mathematical probability (dumb people call it "luck")

Somebody should sue them for fraud.

Anyway, back to the game show, a so-called "psychic" (rene mariano) was dumb enought to accept the invitation to be one of the contestants. The video below will show you how foolish it is to entrust one's faith in somebody who PRETENDS he can see the future.