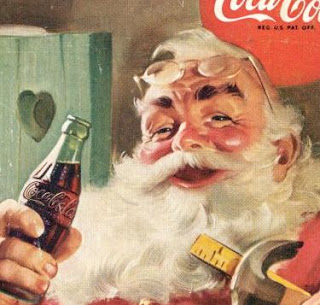 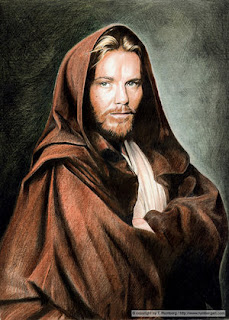 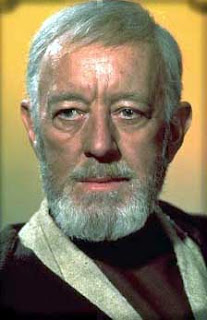 Dear Sage, It was my turn to review you last night for your Science exam. Our review went something like this:

Me: Can a non-living object without an engine move by itself? 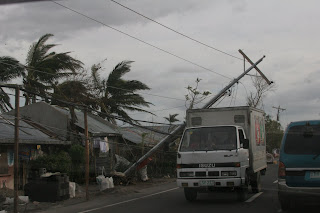 It was not a windy day when this picture was taken. The typhoon Reming's wind was so fierce, the palms of the coco trees were somehow frozen in the general direction of where it was headed when it left the country (due west.) 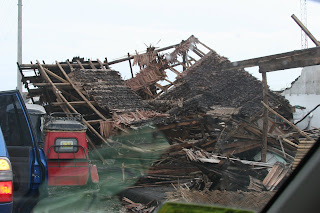 Hardest hit was the poorest of the poor. 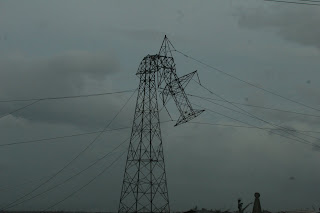 Dear Sage, the pictures of devastation above were taken by a companion who went with me to Bicol last weekend.

The trip... well... it was like living the satire "Candide". In that novel, the protagonist found himself in Lisbon after it was devastated by a powerful earthquake and tsunami. Being surrounded by the stench of death and unspeakable horrors brought about by the forces of nature, he couldn't bring himself to agree with the prevailing belief of the age: That we are living in the best of all possible worlds.

Loosely translated, the belief implies that without the pain of loss, we cannot appreciate what we have. To put it in another way, you can never enjoy the "sweet" without knowing what "bitter" is.

Sounds logical? Try telling that philosophy to an orphaned child whose family and friends are burried underneath tons of volcanic rock and ash together with the rest of his hometown.

We do not need such horror in this world. More importantly, the question the book makes the reader ask is how can we believe in a God who let these horrors happen and still believe that he is Good and Just?

The book did not even attempt to provide an answer to this question. Just like the similar book in the Bible: The Book Of Job. It's a classic case of bad things happening to good people, the book of job ended with God gently reminding Job that the physical universe is full of wonders that we can't even explain. If our minds can barely make sense of the physics of the universe, how can we possibly understand the answer to metaphysical questions? We can't!

Whenever I encounter self righteous and pretentious preachers, who in their hubris try to provide the answer to the question that even the book of Job and Voltaire did not answer, I always quote this verse from the Bible to them

I wont try to provide the answer too. I wrote this entry to caution you about asking this question, about questioning God's existence and his Love for you and me.

The difference between science and religion as far as you guys are concerned should be this: You can defy, recheck, review ALL scientific laws-- that's how science moves forward.

But do not question God or faith. Nothing comes out of it except schisms, heresies and self-righteousness.

If there will come a time in your life when you have to question the rationality of human religion (i.e. Catholic Church doctrine) please read this entry. I must confess, I too do not subscribe to all the doctrines of the catholic religion. In fact, I particularly do not like the present pope. I've been following his career for the past ten years and I almost cried when he was elected pope.

Please, whatever happens, never doubt this:

GOD LOVES YOU VERY, VERY MUCH.

Please remember tha NO natural Philosopher or scientist can prove this to you. And they have no right to tell you not to believe it. Not Einstein. Not Voltaire. That's the same reason why No priest, pastor or preacher has any right to talk to you about cosmology, evolutionary biology, geology and everything scientific. The realm of science is separate from the realm of faith. Never mix the two.

We are not living in the best of all possible worlds. The face of human tragedy will always remind us of this fact-- Just like what happened in Bicol. But having faith in the reality of God's love for you will keep you safe and sane. To live a full life, this is a necessity.

Forget about what the philosophers say.

Conviction of US Marine in Subic Rape Case Was Fair

WOMEN'S RIGHTS IS HUMAN RIGHTS
Power to the Sisters!
Written by TK at Tuesday, December 05, 2006 No comments:

Dear Sage, A couple of nights ago, while watching the news, I was eagerly waiting for the local version of the hollywood minute where they show cleavages... este... movie clips of local starlets. In particular, I was waiting for them to show pictures of Katrina Halili. She does have stunning features and an attitude to match. however, she said something stupid in the interview that really turned me off. She said that to maintain her figure she practically starves herself.

Why is it a big turn off? A woman admitting that she has an eating disorder is the equivalent of the members of the Male species admitting to being impotent and sterile.

Even though she is just a dumb starlet, her publicist should atleast be aware that what she says and does can affect a lot of women her age or even as young as those in the prepubescent years.

Anorexia, Bulimea, and other dumb eating disorders are serious illnesses and should never be glorified. Those who have these should seek treatment immediately. Katrina, sorry baby, Angel Locsin is looking a hell of a lot sexier these days than your pathetically starving body.

Actually, Sage, we saw a pseudo biopic a few nights ago about somebody who is a lot more beautiful than either Angel Locsin or Katrina.

I never really watch biopics shown on TV but this particular episode really pricked the corners of my calloused heart. It was about the child actress known in local TV as "Kiray" She is somebody you see in a sunday comedy series called "Going Bulilit"

Untalented and unimaginative directors and producers of the show always try to make her facial features as the punchline of their predictable scripts. I saw it a couple of times with you and one time I heard your Lola Letty ask out loud if it isn't wrong to tell the child that she is ugly, to be the butt of jokes, to be laughed at by the whole archipelago.

What's heart warming about that pseudo biopic is that it ended with the press conference of the very witty and talented Kiray. The last question asked was the question that Lola Letty had in mind the day I watched an episode with you. Kiray's answer to the querry was iconic:

Whoa! she really knows how to deliver a line. After watching it, gusto kong sabihin "Hija, hindi ka pangit. You're a natural beauty. Pero yung mga katulad nila Angel at Katrina, they need to work on being beautiful, they need surgery, airbrush magic and atleast another half of a brain to reach your level."

Sage, please remember, whenever I say the words "Real beauty..." you always finish them for me with the response "...lies within." Teach that to Sabine and Sadie too. Okay?


Btw, I snatched the quotation below from Rain's blog.


Did you know that if shop mannequins were real women they'd be too thin to have babies?

There are 3 billion women who don't look like supermodels and only eight who do.

If Barbie was a real woman, she'd have to walk on all fours due to her proportions. The average woman weighs 144 lbs and wears between a 12-14.

One out of every four college aged women has an eating disorder. The models in the magazines are airbrushed - not perfect!

A psychological study in 1995 found that three minutes spent looking at a fashion magazine caused 70% of women to feel depressed, guilty, and shameful. Models twenty years ago weighed 8% less than the average woman. Today they weigh 23% less.