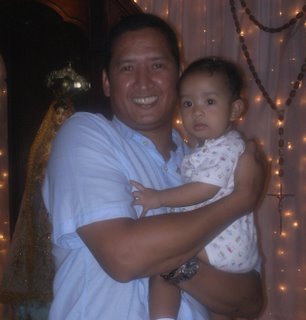 Dear Sadie, Welcome to the Christian World! You were baptized last sunday, 29th of October. You are a new creature now in the eyes of the Lord. That's why your baptism is also a birthday. The ceremony was held at the People's Church (EDSA Shrine) That's your Ninong Hadji and you just before the baptism. 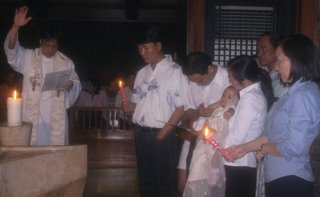 Shown holding the candle representing your Male Godparents is your Ninong Jayson "Dr.J", and for the Ladies, your Ninang Chi-chi. 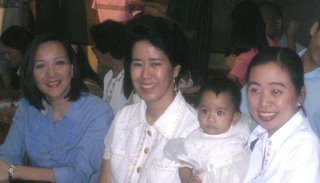 Ninang Chi-chi and Ninang Anna (women of substance and beauty) like you and Mommy. 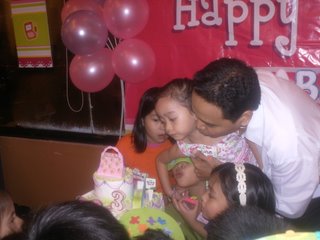 After the baptism we went to Max Tiendesitas to Celebrate both your baptism and Ate Sabine's Birthday. That's Ate Sabine. Helping out with the cake blowing duties are Ate Kitkat and Ate Sage (partially covered)

TO ALL THE GODPARENTS AND GUESTS WHO MADE THIS DAY MORE SPECIAL SIMPLY BY BEING THERE...

...to Jayson and Anna who came despite of such a short notice (They were notified just a day prior to the event). These two faced a supertyphoon and had to take public transportation just to be there with us at the People's Church, Sadie.

...to Noel and Jenn who lent so much of their precious time to help prepare for this BIG DAY.

...to Hadji who took so many beautiful pictures during the baptism.

...to Robie who didn't flinch when I brazenly stole the parking space his security guards reserved for his car in front of Max's Restaurant. (mwahahahahahahaha!)
Written by TK at Monday, October 30, 2006 3 comments: 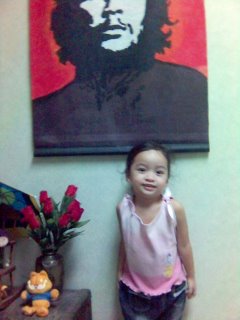 Dear Sabine, The real essence of Halloween is that Christ's triumph over the Devil is so absolute that all evil has lost the power to really scare us.

Just like Che Guevarra here (the poster behind you, Sabe.) During the 60's, his picture was feared by those in the non-communist world. Now, after the defeat of communism, he's become a harmless icon of a bygone era. Just like garfield (the stuffed toy beside you. Even mice fear him not)... Just like the devil.

Christ's victory on the Cross proved that the devil is defeated. Ghosts and witches and goblins are only as real as the plastic and paper that children wear as costume during halloween. The powers they supposedly wield exist in newspaper clippings and books and stupid movies because those are the only places that they can exist. Because thanks to Christ, the defeated enemy has no power to break the laws of Einstein and Newton in this Universe. We celebrate Halloween to remind ourselves that the devil may scare kids but he can't scare adults anymore --Atleast those who believe in the reign of Logic, Truth and Science in God's Universe.

Your Ninong Noey and I loved the movie "Labyrinth" ages ago. Jennifer Connelly quoted something that we should all say to the devil:

"From dangers untold and hardships unnumbered
I've fought my way into the castle beyond the goblin city
to take back the child that you have stolen...
For my will is as strong as yours
and my Kingdom is as Great..."

and then she said the magic words...

"YOU HAVE NO POWER OVER ME."

The fear of the Lord is the beginning of wisdom. To "Fear" means to respect. That's why we must show NO respect to a defeated enemy called the devil for he has no power over you and me anymore. The only power he has is that of a village idiot. Every halloween we kick him around and mock the once mighty enemy who used to scare the wits out of the ignorant. And we have the Lord Jesus Christ to thank for that.

To Noey and Jenn,

There were two nuns...

One of them was known as Sister Mathematical (SM),

and the other one was known as Sister Logical (SL).

It is getting dark and they are still far away from the convent.

SM: Have you noticed that a man has been following us for the past thirty-eight and a half minutes? I wonder what he wants.

SL: It's logical. He wants to rape us.

SL: The only logical thing to do of course is to walk faster.

SM: It's not working.

SL: Of course it's not working. The man did the only logical thing. He started to walk faster, too.

SM: So, what shall we do? At this rate he will reach us in one minute.

SL: The only logical thing we can do is split. You go that way and I'll go this way. He cannot follow us both.

SM: Sister Logical! Thank God you are here! Tell me what happened!

SL: The only logical thing happened. The man couldn't follow us both,so he followed me

SM: Yes, yes! But what happened then?

SL: The only logical thing happened. He reached me

SM: Oh, dear! What did you do? SL: The only logical thing to do. I lifted my dress up.

SL: The only logical thing to do. He pulled down his pants.

SM: Oh, no! What happened then?

SL: Isn't it logical, Sister? A nun with her dress up can run faster than man with his pants down.

And for those of you who thought it would be dirty,

I'll pray for you!

(Doc Patricia Ga, thanks for forwarding this email a few hours ago.)

Dear Sage, Sabine and Sadie, I've been visiting a forum lately. (Some habits never die, you know.) I just hope I'm conducting myself honorably. Maybe someday you can read my posts in Nicole's blog. In essence, what I tell those who would care to listen is that there is no woman alive, or dead, who does not deserve respect from us men-- Especially those men armed with guns and trained to use force on equally armed combatants.

And for those of you who thought that Filipina women (like Nicole) deserved to be victims of that kind of a heinous crime, 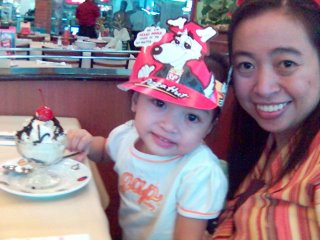 Dear Sabine, Sometimes you notice that we spend more time with your Ate Sage because your Mom and Lola help her study her lessons, and Sadie monopolizes Mom's time because she breastfeeds her. Pero you know what? We make it a point to take you out once in a while. Kami lang ni Mommy kasama mo. We enjoy being with you so much. We enjoy showing you off. And you enjoy flashing your "wolfy smile" to everybody else (it's wolfy because your pair of canine teeth are prominent.)
Written by TK at Monday, October 23, 2006 No comments: 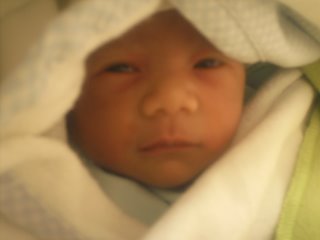 Dear Sage, this is the first picture of your cousin Lance. Got attitude written all over his face, eh? This guy will break a lot of hearts someday. Hope he finds la femme. Hope he'll be as lucky as your old man. 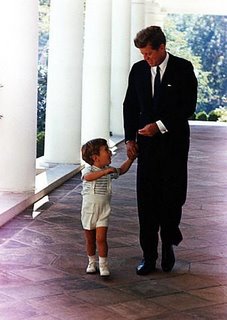 Dear Sage, over 4 decades ago this October, the World came close to witnessing a nuclear exchange between the now defunct Soviet union and USA. I don't know what makes a man Hate his own kind so much that he would even contemplate nuclear annihilation as an option to resolve any conflict. Maybe it's because we tend to demonize our enemies or the object of our hatred.

I had a classmate once who hated my guts. We were in gradeschool. When we fight I don't back down because I believe I was always on the side of Truth, Justice and the American Way (I told you, too much CARTOONS is bad for you) In my mind I always imagine him as an ENEMY of the "Superfriends" Somebody who hates Superman and Loves Lex Luthor.

I was surprised when I saw him play with Superfriends action figures. It was very hard for me to comprehend that he also hates Lex Luthor. I was more surprised when he told me once that he likens me to Lex Luthor and he thinks of himself as Superman.

Years later I found out this is one way of demonizing our enemies. We think of them in the worst possible light, hence whatever actions we take against them (be it a punch in the face, an icepick puncture between their ribcage, a hale of bullets, or Nuclear fire) will be justifiable from our warped point of view.

Whenever you feel like demonizing whoever is the object of your dislike, always remember that deep inside he or she also wants to be counted as one of the good guys. One of the Superfriends.
JUST LIKE YOU AND ME.

And the similarities between us and our perceived enemies do not stop there...

"WE all inhabit this small planet,
We all breathe the same air,
We all cherish our children's future,
And We are ALL mortal."--JFK
Written by TK at Saturday, October 14, 2006 No comments:

Dear Sage, It was very frustrating for me not to have been able to bring your mom with me back to NY last March. Ten years ago I saw “The Phantom” and promised myself that I am going to see it again with Ayheen. Maybe next time.

Before I saw it at the majestic theater I was already enchanted by it. I even bought a “Tape” (it was the Pre-digital age) and listened to it whenever I could. I already memorized the songs. Though I hate the opera (I still do) I fell in love with Christine’s story. There was this very unforgettable scene when Christine took pity on the Phantom who was threatening to kill her lover and to exile her from the light of day so that she could share with him his fate: To forever suffer the torment of loneliness as an homage to music.

Then, she sang to him, like lullaby, these words:

“Pitiful creature of darkness,
What kind of life have you known
God give me courage to show you
You are not alone…”
Unexpectedly, she kissed him. A kiss both supremely passionate and chaste, it was able to reach down the infinite chasm of his being until it breached the caverns and awakened the humanity hibernating within.

He was human after all. And his humanity was lying there, dormant for so long that it just needed the spark of Christine’s kiss to erupt into the open sky- it became a fiery furnace that cleansed the beast and change the color of his scarlet soul into molten white.

That is the power you beautiful creatures have over horrible oafs/men like us. Your Mom gave me such a kiss a long time ago.

A woman’s love may not save the human soul. But it can save a man in so many ways.
Written by TK at Wednesday, October 04, 2006 2 comments: